Does a child have a 'right' to meaningful relationships?

Does a child have the right to a meaningful relationship with both parents, unless proven unsafe for them to do so?

Oh let me count the variables, one by one...

The Burden of Proof
How does one prove it is unsafe? You don't need proof. You don't need fact. You need allegation, and then if CAFCASS (the court welfare service) or a Judge think that allegation was 'probable', then you may see that relationship end entirely. In family law, the burden of proof required to determine whether a matter happened (or not) is a 'balance of probability'... not the more robust 'beyond all reasonable doubt' as is seen in criminal law.

Factual Polarity
Despite matters being decided on a 'balance of probability', the judge has only two options available to him or her when making a final decision. The alleged incident did happen, or it didn't. There is no option of 'unproven', or might have happened. Therefore, when a judge finds that a matter was probable, it becomes factual!

'M'Lord, he leaves alcohol and drugs around the house'.
'Given your anger today, I can see how it is probable that that did happen.'
So without any evidence, or witnesses, or any real evidence at all, the accused becomes guilty.
'From M's testimony, clearly you're irresponsible and a risk to your child.'

In April 2013, a parent will only get legal aid in the family courts if they 'allege' domestic violence. You can image what we are anticipating to happen. What penalty for false allegations? Typically none. Will those allegations face robust scrutiny? Not when the President of the Family Divison of the Courts is trying to reduce the number of finding of fact hearings to save money... and not when the test for deciding fact is a 'balance of probability'.

What risks... On a might have happened, a parent can be removed from their home and their child. An injunction based on a 'might have happened' is later taken for 'it must have happened'. Surely allegations of abused/violence/assault (which can include verbal assault) should be judged in the criminal court, under the more evidence based criteria. Many parents would see a loss of home and limitation of family life to be a worse punishment than prison.

Subjective Observation
The burden of proof becomes more flimsy in that a judge will count as 'factual evidence' his or her opinion of the parties and their demeanour in the court room. A party with dyslexia could be found to be evasive or deceitful (on account of the way they answer questions... and yes, I know of cases where this happened). A parent trying to present his case professionally might be seen as cold. Parents who are nervous, stressed, anxious can be seen as overly emotional, or unable to control emotions in life.

Limits on Evidential Scrutiny at Appeal
How the parties appear in court cannot be challenged in the appeal court, because the appellate judge 'does not have the benefit of seeing/hearing the parties give evidence'. So the validity of this most flimsy evidence becomes set in stone when at appeal. Unchallengeable.

Disadvantage for the Litigant-in-Person
A litigant-in-person (a party/parent without legal representation) does not have the benefit of having a solicitor cross-examine their ex-partner for them, so is at a significant disadvantage to the represented party as the judge scrutinises how the question was asked, as well as the answer. The litigant's stress, unfamiliarity, anxiety, fear may seem excessive to a judge who is used to the settings of court, and not emotionally involved in the outcome of proceedings or allegations which have been made.

In 2010, the current President of the Family Division of the Court set greater limits on lay advisers (McKenzie Friends) being able to address the court ('rights of audience'). The circumstances were limited to 'exceptional', and perversely, it is only where the litigant is able to articulate that they are too inarticulate to present their own case that rights of audience will commonly be granted to their lay adviser. Was this done in the interests of justice, or protecting the role of the legal profession? The legal principle of equality in arms seems to have left the family court arena.

Some feel such limitations corrupt the court's duty to Article 6 of the Human Rights Act 1998, and the right to a fair trial. Bear in mind that in April 2013, legal aid is to all but be removed from private family law proceedings (except in cases where domestic violence is alleged). Only the wealthy will have the buffer of an advocate speaking on their behalf.

Discrimination
In our experience, these limitations significantly affect parents with specific learning difficulties such as dyslexia. Due to pride, or fear of being viewed as 'less capable' some don't raise the communication difficulties that they have when under stress. One doesn't know how court affects you until you've had that experience. The litigants reasonable need to have questions repeated can be taken as a lack of intelligence, while halting replies might be viewed as their lacking in honesty. Hand written evidence, long legal words, huge volumes of paperwork present them with what can be insurmountable hurdles.

Judicial Notice
There is also what can be the flimsy concept of 'judicial notice', which in essence means that if a judge considers a matter is subject to common societal belief, no proof or evidence is needed to support that belief (if a judge mainly socialises with creationists, you'd imagine that in his/her court, Darwin would be considered a fraudster). From a legal perspective, opinion becomes fact.

In Summary
So... must you prove that a parent is unsafe? No... the presumption of a meaningful relationship doesn't bear much if any scrutiny, and neither does the opinion that justice is defended by our current legal system. The Government's proposals to give that presumption more strength will be meaningless unless judicial discretion is curtailed, and if the threshold and criteria for successful appeal is re-examined.

What does 'meaningful' mean anyway?

Alternate weekends. Two hours at McDonalds or half the time. Unless defined, it means that each individual judge decides what it means. A game of chance, as without definition, family life is decided upon individual ideology rather than any social policy or fact. What is sometimes called... the family court lottery... and I don't buy that each case is fact specific, for the reasons stated above. No sir... not at all.

A right to family life... a right to meaningful relationships if safe... (the debated) presumption of shared care... all meaningless without definition. 'Every case must be decided on its own merits actually means each case is decided upon the individual ideology and perceptions of family life'. Surely our children deserve a little more certainty than that?

Video statistics from 'Outcomes of applications to court for contact orders after parental separation or divorce.' Joan Hunt and Alison Macleod. Oxford Centre for Family Law and Policy. Department of Social Policy and Social Work University of Oxford. Family Law and Justice Division. September 2008
Posted by Michael Robinson at 02:02

Our Blog Has Now Moved 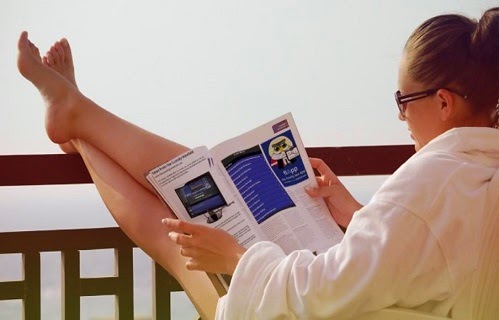 Or open the app by clicking the image below 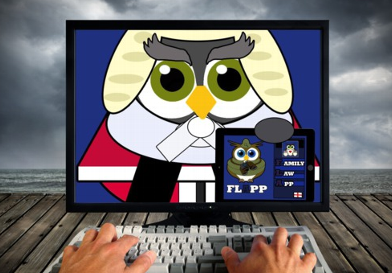 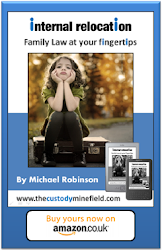 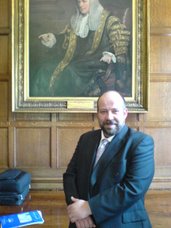 The Custody Minefield was our first published book. It reached no.2 on Amazon's Divorce Chart, and was recommended by the Magistrates Association Magazine and by the Divisional Chair for the British Association for Counselling and Psychotherapy. Now superceeded by our new Digital Book on Shared Residence, available at www.thecustodyminefield.com 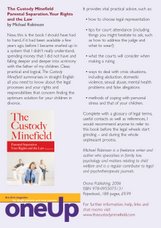 '...this book should be made available to any parents who are separating - it could save them a lot of expense in legal fees.' - Review in the Magistrates Magazine

Some of my articles 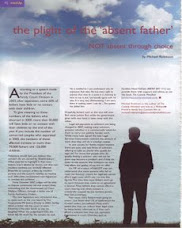 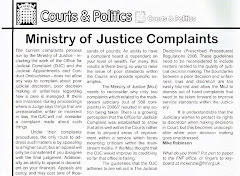 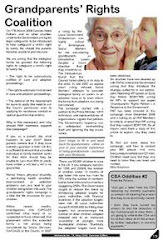 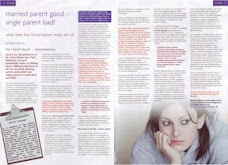 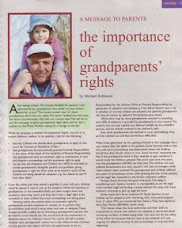 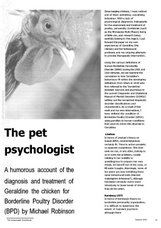 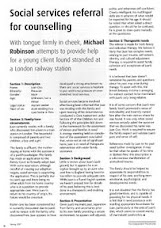 Some articles about my work 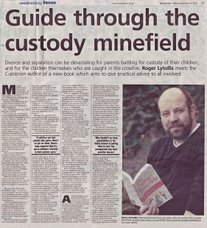 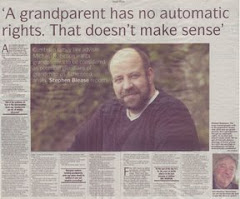 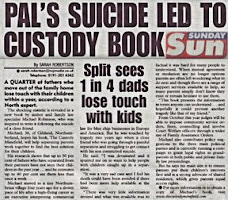 Articles by the author

McKenzie Magazine: 'Relocation: Developing the arguments for a challenge to Payne v Payne'

McKenzie Magazine: Looking in my crystal ball - the courts in 2009

The Independent Practitioner: The Pet Psychologist

OneUp Magazine: A Message to Parents - The need for Grandparents Rights

McKenzie Magazine: 'Campaigning Successes x 2: Kids in the Middle and Beyond the Nuclear'

The Telegraph Blogspot: 'The family is all over the place for Gordon Brown, Harriet Harman and Bob Geldof'

The Independent: 'The Truth about Daddy Day Care'

News and Star: 'The Custody Minefield'

News and Star: 'A Grandparent has no automatic rights. That doesn't make sense.Sunday Sun: The Custody Minefield'

...on the Custody Minefield

Latest Review for The Custody Minefield

Magistrates Magazine: 'In my opinion this book should be made available to any parents that are separating – it could save them a lot of expense in legal fees.'

Responses to the Government

EDM373: Tabled by David Maclean MP in support of the Relocation: Children's Needs and Rights Campaign

EDM1199: Tabled by John Hemming MP in support of the Grandparents' Rights Campaign

Factsheets and e-Guides on the TCM